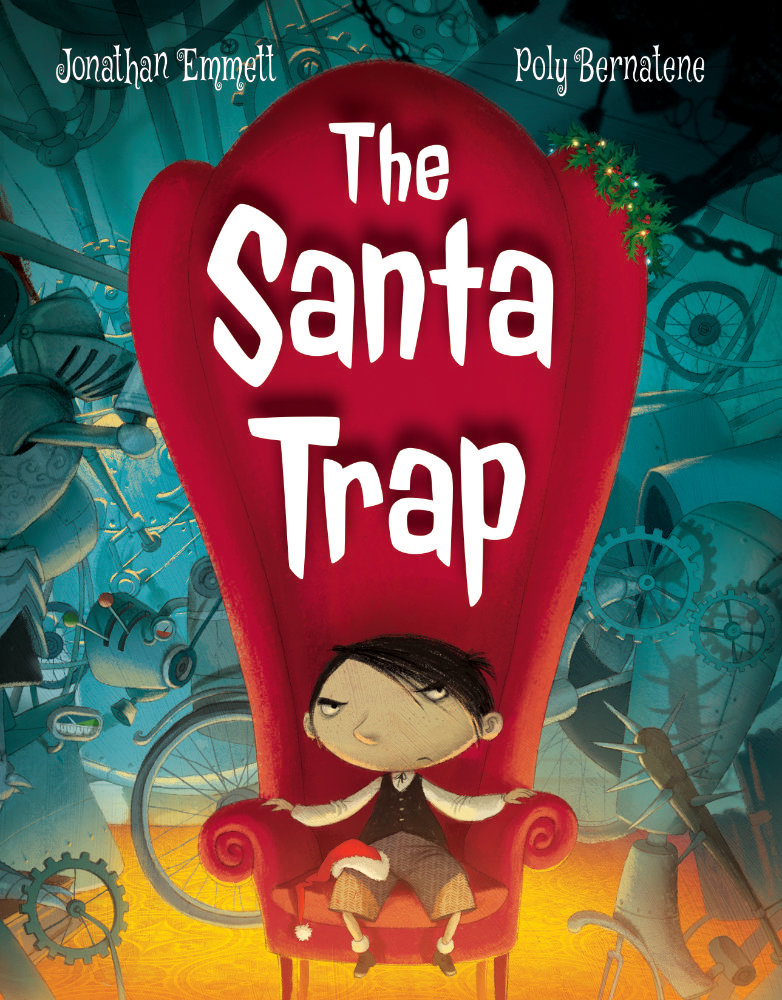 Bradley Bartleby is bad – so bad that he plans to trap Santa Claus and ruin Christmas. With a house full of dynamite, guillotines and trap doors and a garden full of hungry tigers, what could possibly go wrong?

“This funny, beautifully illustrated story will have you talking about the importance of ‘being good for goodness’ sake’.”
THE WASHINGTON POST 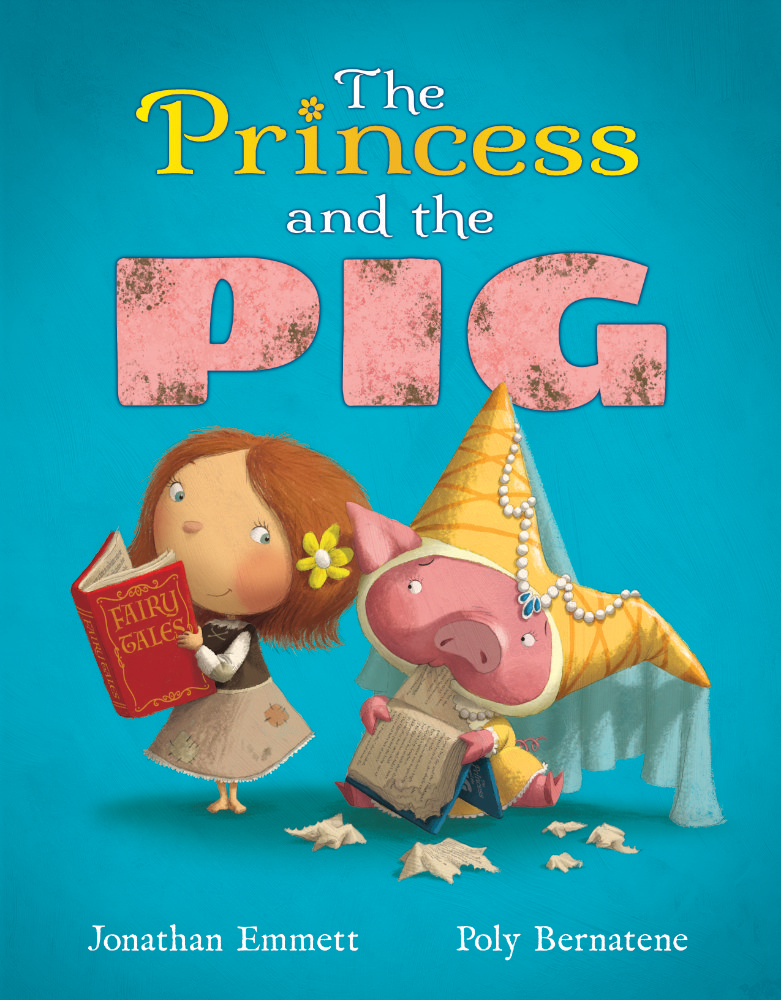 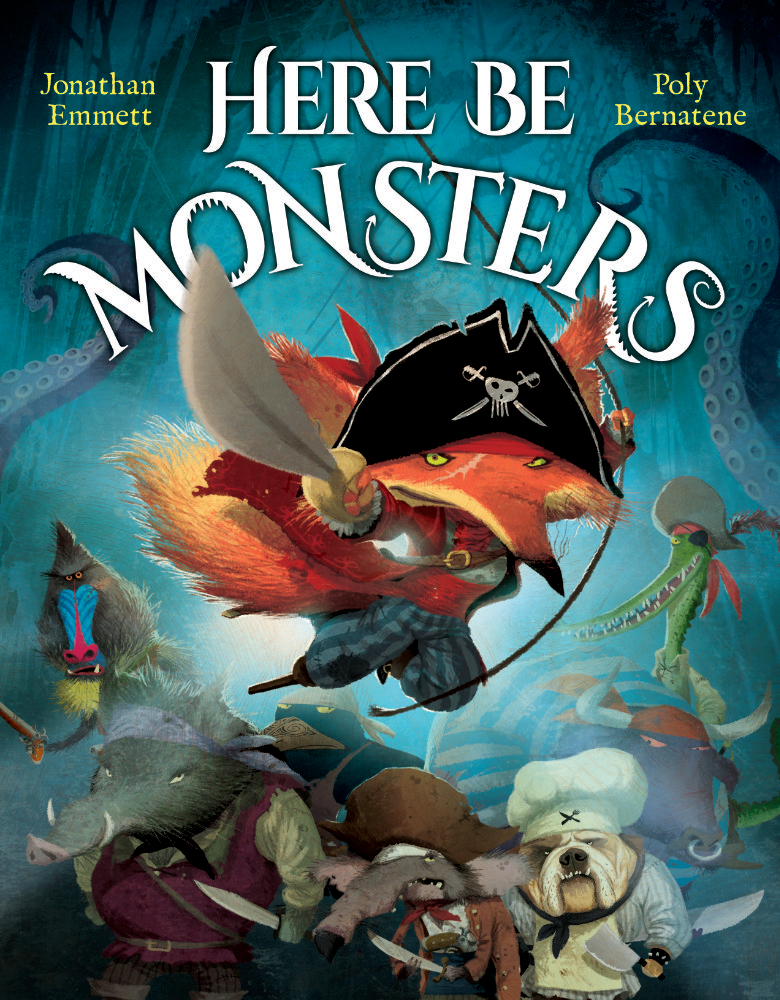 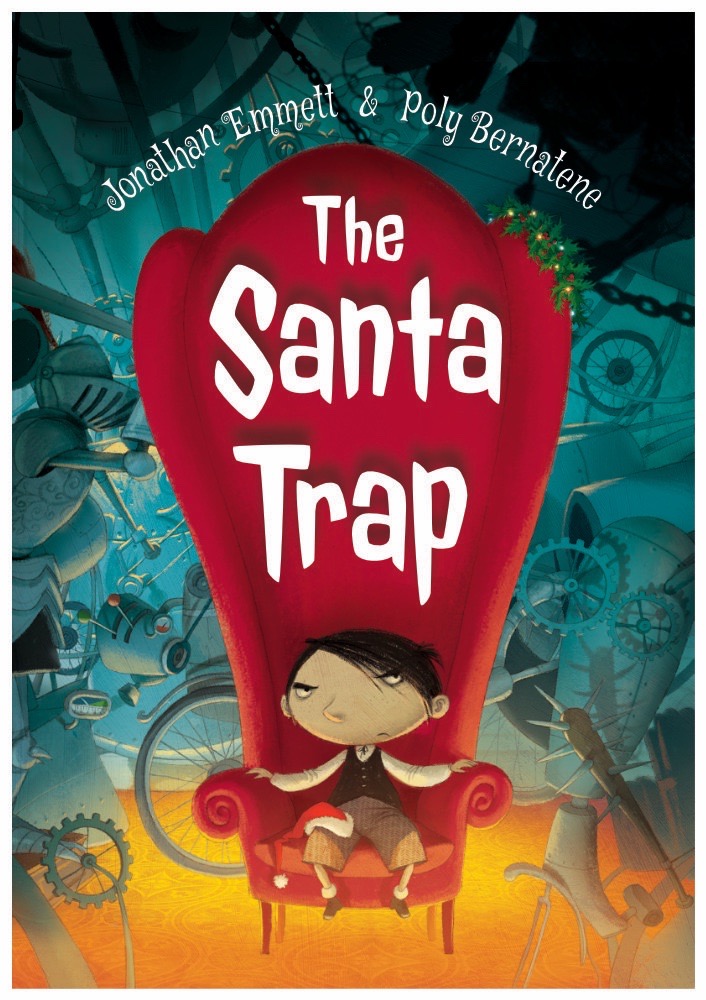 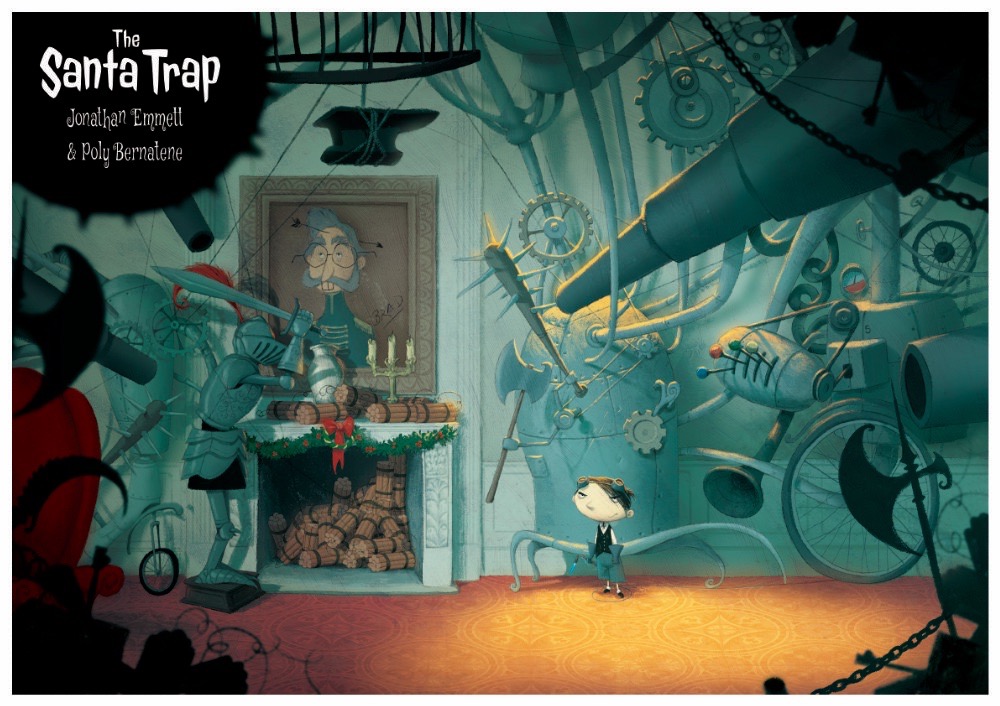 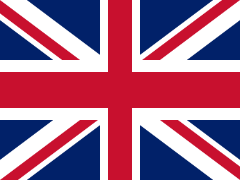 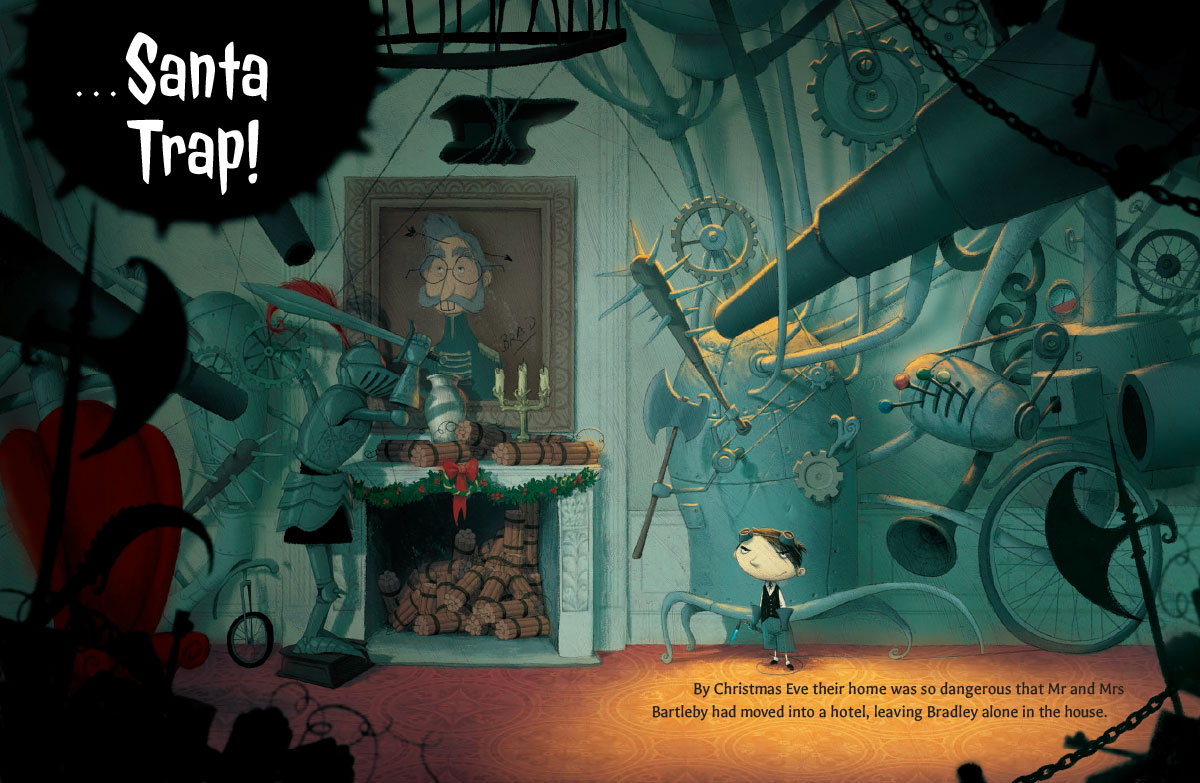 The Santa Trap was a pet project for me and I was very particular about how the story was published which is one of the reasons it took five years to go from conception to publication.

A lot of the inspiration for the story came from the Santa traps I built as a child. I was the sort of boy who, when I wasn’t building things out of Lego, was taking things apart to see how they worked and often using the pieces to make something else. Like many children I had lain awake on the night of Christmas Eve, determined to catch a glimpse of Santa delivering presents to the foot of my bed, only to fall asleep before he arrived. Unlike many children, I decided that the solution was to build something to wake me when Santa eventually arrived Strictly speaking, the things I built were alarm systems rather than traps. I didn’t want to take Santa captive – I just wanted to catch him delivering my presents.

The first traps I built were very crude. I’d balance things on top of my bedroom door so they’d come down with a crash when the door was opened. But Santa had no problem disabling these, so as the years went by, my traps became more sophisticated and I started using wires, batteries and buzzers.

One year, I made a pressure sensitive pad from two sheets of metal foil and a sheet of perforated polythene. I laid the pad next to my bedroom door and covered it with a rug – but Santa still managed to slip past without stepping on it!

Eventually, I arrived at what I felt sure would be a Santa-proof approach. I strung four thin nylon tripwires around my bedroom and tied the ends to four large beads resting on one end of a Lego see-saw. The opposite end of the see-saw was wired up to a battery-powered alarm. If a tripwire moved, the bead it was tied to would be pulled off the see-saw, causing the opposite end to drop and close the circuit on the ear-piercing alarm. In addition to real tripwires, I strung a similar number of decoy tripwires around the room. It was impossible to tell the real tripwires and the decoys apart – so they both had to be avoided. I tested the trap myself and — even with the light on – I was unable to cross the room without setting off the alarm. The whole system took me so long to build and test that I didn’t get into bed until almost midnight, by which time my bedroom looked like an enormous web, criss-crossed with gossamer threads, with me lying spider-like at the far end.

The strict code of secrecy surrounding Santa prevents me from telling what happened that night*, but I can tell you that it was the last Santa trap I ever built. 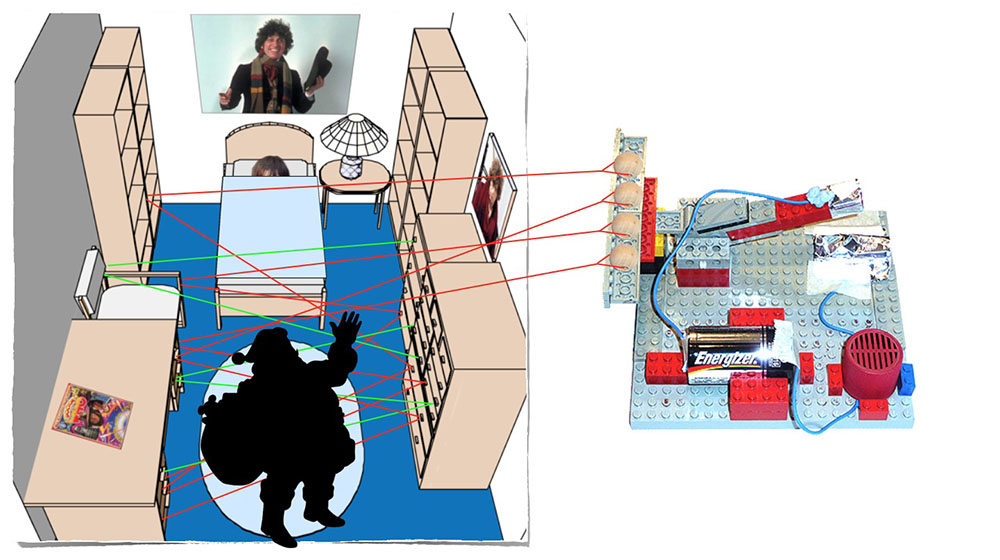 This diagram, taken from my Santa Trap virtual visit session, illustrates the final trap that I built and shows a recreation of the Lego see-saw device used to trigger the alarm.

The other inspiration for the book was an illustration by Ronald Searle for one of the Molesworth books written by Geoffrey Willans. The books were originally published in the 1950s, but I discovered them as a teenager in the 1980s. The third book, How to be Topp, includes a “Xmas nite” cartoon of Molesworth and his friend Peason prying open the jaws of a huge bear trap in preparation for Santa’s visit. The image seems to be Searle’s own invention (there is no reference to it in Willans’s text) and it is the sort of deliciously dark humour that Searle excels at. Unlike my harmless alarm systems, Molesworth’s Santa trap is unmistakably life-threatening.

This Ronald Searle illustration was another inspiration for the story.

When I came across the cartoon again in 2005 it got me thinking about a story. What sort of a child – apart from Molesworth and myself – would try to trap Santa? How would they go about it? And why would they want to do such a thing? I decided that the child in my story would be a villainous brat, with the resources of a wealthy family and a long-standing grudge against Santa Claus.

When I mentioned the idea to my agent, Caroline Walsh, she thought it was terrific and made the unprecedented (for me at any rate) pronouncement that if I wrote it, she could sell it, so I set about writing it – and then came to an almost immediate stop. The problem was that if Bradley (as the boy in my story was now called) was to trap Santa, Santa would have to visit Bradley’s house. But if Bradley was as villainous as I wanted him to be, why was Santa visiting him? Surely such a bad child did not deserve any gifts? This seemed an insurmountable obstacle at the time, so I decided to put the story to one side until I had a way around it.

Over a year – and two Christmases later – I finally came up with a solution that I was happy with: Santa still visited Bradley because – as bad as Bradley was –  “Santa is such a kind old fellow that he believes, no child, even one as bad as Bradley, should go without a Christmas present.”

Now that I had Santa’s motivation sorted, I was able to write the whole story without any further delay. I sent it off to Caroline and – as she had predicted – she had no difficulty finding publishers who wanted to take it. We ended up with similar offers from three different publishers. All three were good publishers, but they all had different takes on the story. One of them was uncomfortable with a child being portrayed as irredeemably bad and wanted him to become Santa’s little helper at the end of the story. Another felt that some of the traps Bradley built, such as the guillotines, were a little too dangerous and should be replaced with something less life-threatening. Only the third publisher, Macmillan, were happy to accept Bradley for the black-hearted brat that he was and that’s one of the main reasons the book went to them.

Another reason for choosing Macmillan was that I had a particular illustrator in mind for the book and Macmillan editor, Suzanne Carnell, had proposed the same illustrator. The illustrator was interested and agreed to do a sample illustration for the book. However months went by and, despite prompting from Suzanne, the sample did not appear. After over a year of waiting we finally realised that it was never going to appear and I heard subsequently that the illustrator had emigrated to Canada without telling us!

Having been disappointed by the first illustrator, we set about finding an alternative, only to have a similar thing happen again — and again — and again! Part of the problem was that I had definite ideas on how the book should be illustrated – I wanted illustrations that would be strong on detail, but also had a touch of the dark humour evident in the Searle cartoon – and this narrowed down the choice of illustrator immensely. Nevertheless, every six months or so we’d find a suitable illustrator who seemed to be interested in doing the book, but they’d always back out before submitting an artwork sample.

After going for three years without securing a suitable illustrator, the book’s new editor, Emily Ford, told me that she thought she’d found another promising candidate and a couple of weeks later she sent me a colour sample from Argentinian illustrator Poly Bernatene. From the moment I set eyes on the sample I knew that not only was the search finally over, but that we had ended up with the ideal illustrator. It was clear from his first drawings that Poly had given Bradley just the right mix of menace and mischief and that his parents had just the right attitude of fearful apprehension.

Poly soon started work on the book, producing roughs for each spread. For most illustrators, roughs would take the form of black and white pencil sketches showing the composition of each spread. However Poly is unusual in that he produces his roughs in Photoshop allowing him to indicate both colour and composition. Once a rough has been fixed and agreed upon, Poly works over it, adding tone, patterns and textures to create the final artwork. I love the way that Poly has applied patterns to the carpets of the Bartleby mansion, giving the illustrations a lovely sense of depth and richness.

One of Poly’s colour roughs. MOVE YOUR MOUSE OVER OR TAP THE IMAGE TO SEE THE FINAL ARTWORK

It’s been a long wait, but I’m thrilled with the way the book has turned out. Each of Poly’s spreads is full of character and amusing detail. The spread showing the snowy mansion exterior, for instance, is far more spectacular and atmospheric than I could have hoped for.

* Which is a shame because it was extremely funny.

“This funny, beautifully illustrated story will have you talking about the importance of ‘being good for goodness’ sake.'”
Tracy Grant, THE WASHINGTON POST

“A dark, funny and refreshing alternative to some of the more saccharine Christmas offerings.”
THE BOOKSELLER

“‘Bradley’s parents always gave him whatever he demanded, not because they thought he deserved it, but because they were terrified of him.’ Bradley Bartleby was ‘born bad,’ and as a result, he gets socks from Santa every Christmas. Fed up, he spends an entire year turning his parents’ mansion into a diabolical trap for the jolly old elf, one that involves dynamite, guillotines, and tigers … Bernatene’s cinematic mixed-media illustrations work wicked magic with Emmett’s darkly comedic prose, as Bradley’s plans backfire explosively. An ideal Christmas present for children who prefer Halloween.”
PUBLISHERS WEEKLY – Starred Review

“I’ve seen a giant stack of new holiday-themed picture books this year. While many of them are good, I find this one the most outstanding in terms of sheer entertainment value. … The no-holds-barred humor – both author and illustrator are not afraid to pull out all the stops with Bradley’s inventive weapons – is refreshingly funny. Emmett builds the tension well, and Bernatene’s digital mixed media illustrations are, at turns, over-the-top comical, as they should be, but then strangely beautiful in spots.”
Julie Danielson, KIRKUS REVIEWS