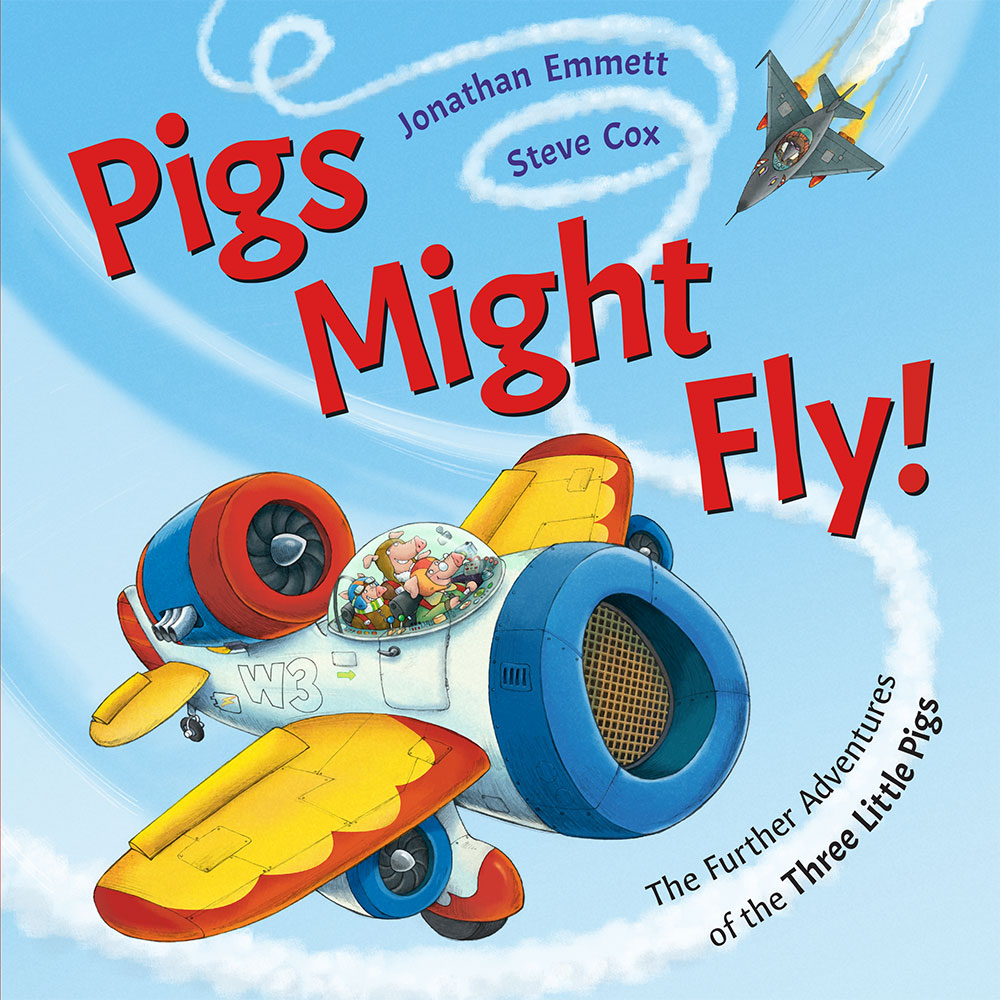 The Further Adventures of the Three Little Pigs

The Big Bad Wolf is back and badder than ever!
So, when the Three Pigs enter the “Pie in the Sky” Air Race, he’s determined to snaffle the prize pies and have the pigs for pudding. Will the Wolf win – or can Wilbur save the day?

“A super book with a good storyline, amusingly told and wonderfully illustrated … a book children will want to look at again and again.”
Urmi Chana, BOOKS FOR KEEPS

“Bright, breezy and fun with action on every page.”
CAROUSEL

This video was commissioned for Nottingham’s Story Parks Project. 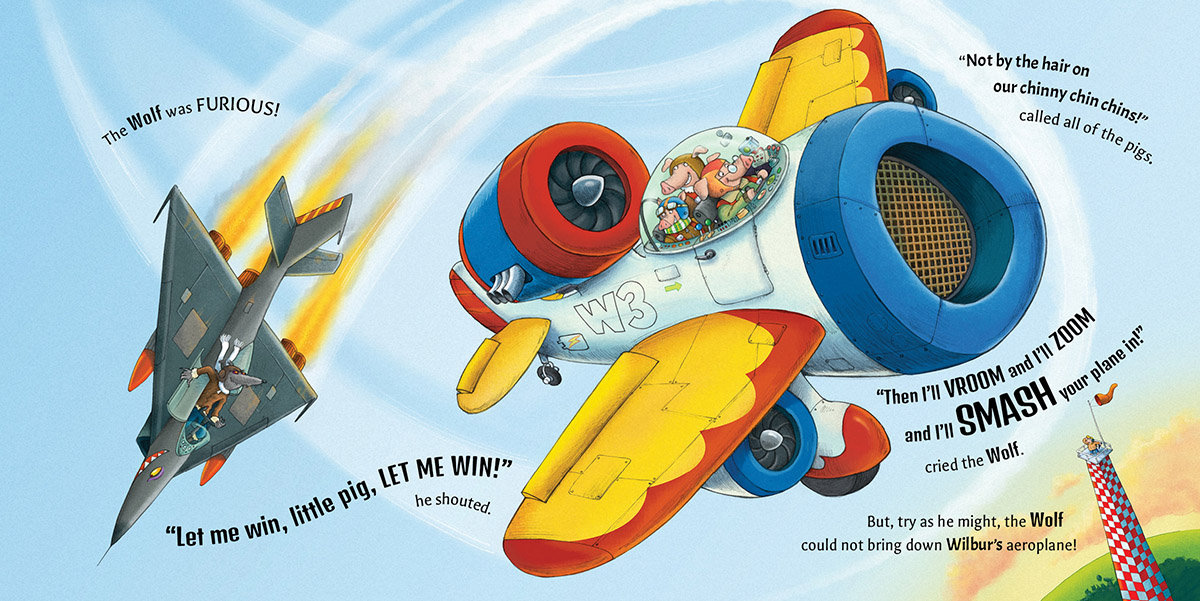 The idea for this book came from my son Max, who was seven at the time. As we walked home from school one day, Max told me that he had written a story about the three little pigs. In Max’s story, the pigs had a new adversary, “The Big Bad Ant”. The ant was chasing the pigs and so they climbed on a bicycle to escape. We played around with the idea as we walked and by the time we got home, the chase had developed into a cycle race in which the ant was using a rocket-powered bike to race ahead of the pigs in an attempt to ambush them.

I thought that the idea had a lot of potential, so, after reinstating the wolf as the villain, I developed it a little further. I thought that an air race with jet-planes would be more exciting than bicycles and moving the action into the sky also lent itself to a snappy title – Pigs Might Fly!

I went back to the original Three Little Pigs story for inspiration and found that there were dozens of versions in existence*.  Many recent versions include the wolf’s two catch-phrases “Let me IN, little pigs, let me IN!” and “Then I’ll HUFF and I’ll PUFF and I’ll BLOW your house in!”  When I realised that these phrases could be adapted to fit my air race plot, I knew that the story was going to work.  In my story the wolf shouts “Let me WIN, little pigs, let me WIN!” and “Then I’ll VROOM and I’ll ZOOM and I’ll SMASH your plane in!”

The text was accepted by Mandy Suhr at Puffin books and we began to discuss possible illustrators. In a vehicle-centred picture book like this the appearance of the vehicles is as critical to the book’s appeal as the appearance of the characters, so we needed an illustrator who was good at drawing technology.  Such illustrators are not that common, since artistic people tend not to be technical (and vice versa).  Having experienced this difficulty before, I had done some research and prepared a shortlist of suitable illustrators. Steve Cox’s name was on the list on the strength of an illustration of a mechanical bird (shown below) that I’d seen in his online portfolio.  The illustration demonstrated Steve’s skill for drawing complex machines, which combined with the versatility of style he displayed in his other work, made him a strong candidate.  Mandy had prepared a similar shortlist, and Steve’s name was on that too – so that settled it!

Once on board, Steve set about doing some character sketches of both the planes and their pilots.  His brief for Wilbur and the Wolf’s jets was particularly challenging as I had suggested that, in addition to looking “cool” and “powerful” both planes should resemble their pilots.  I think that the design Steve produced for Wilbur’s jet is particularly skilful, since a pig’s snub features do not naturally lend themselves to the aerodynamic lines of a jet plane.  And as if that wasn’t impressive enough, you can see four more alternative, but equally pig-like, prototype designs hanging above the drawing board in the illustration of Wilbur’s office.

While Steve fine-tuned his designs and spread layouts, the book’s editor Sarah-Jane Barrett set about streamlining my text.  I had packed lots of pig and wolf related puns into the original draft, but some of the jokes, such as Woody being “ham-fisted”, held up the plot and would not be understood by most young readers – so out they went. However, Steve was able to sneak a few puns back into the illustrations, by including them as headlines in the wolf’s newspaper clippings.

Steve’s vibrant action-packed final illustrations lived up to the promise of his early sketches and the finished book is everything I’d hoped it would be.  And my son, who started the whole thing with his Big Bad Ant story, loves it.

* It’s widely acknowledged that the story was first published as part of a collection entitled Nursery Rhymes and Nursery Tales (London: circa 1843) by James Orchard Halliwell. Halliwell’s story was based on a folk tale, brought to America by African slaves in the same manner as the tales of Uncle Remus.  Halliwell’s version was later adapted and popularised by Joseph Jacobs in his collection English Fairy Tales (London: David Nutt, 1898) and has been re-adapted many times since. In this and other early adaptations the wolf eats the first two pigs and is himself eaten by the third . Later adaptations are less carnivorous, with the first two pigs fleeing to take shelter in the third pig’s house where the wolf is finally scared away after receiving a bad scalding at the bottom of the chimney. This version of the ending (where all four characters survive) is assumed for the sequel Pigs Might Fly!

Updated for today’s more modern and discerning young picture book reader, this is a sequel to the classic tale of the Three Little Pigs. The Big Bad Wolf, still miffed from getting his bottom severely scalded the last time he pursued the little oinkers – here called Waldo, Woody and Wilbur – is out for revenge. He decides to intervene when the pigs enter a local ‘Pie in the Sky’ Air Race. His sabotage of the straw, wooden and metal planes starts well … but he soon gets his comeuppance! Bright, breezy and fun with action on every page.
John McLay, CAROUSEL

This is a super book with a good storyline, amusingly told and wonderfully illustrated … The typography has been cleverly accomplished and works delightfully in combination with the Illustrations.  I think this is a book children will want to look at again and again.
Urmi Chana, BOOKS FOR KEEPS

This book is brilliantly paced, full of excitement and a fitting way to revisit well loved characters with a couple of new wrinkles thrown into the mix.
Phil May, READ IT DADDY

This delectable tale bills itself as the Further Adventures of Three Little Pigs … Fantastic details within the pictures and clever word play make this a great take on the three pigs story … Guaranteed to entertain.
MY BOOKS MAG

Ever wondered what happened to the three pigs after they had outwitted the wolf?  No, they didn’t just live happily ever after – life’s not like that. Waldo, Woody and Wilbur (the pigs) decided to enter an air race building their own planes … You will have to read this comical story with colourful, expressive pictures to find out what happens.  Great fun for all ages and abilities and good for sharing.
D J Williams, PRIMARY TIMES