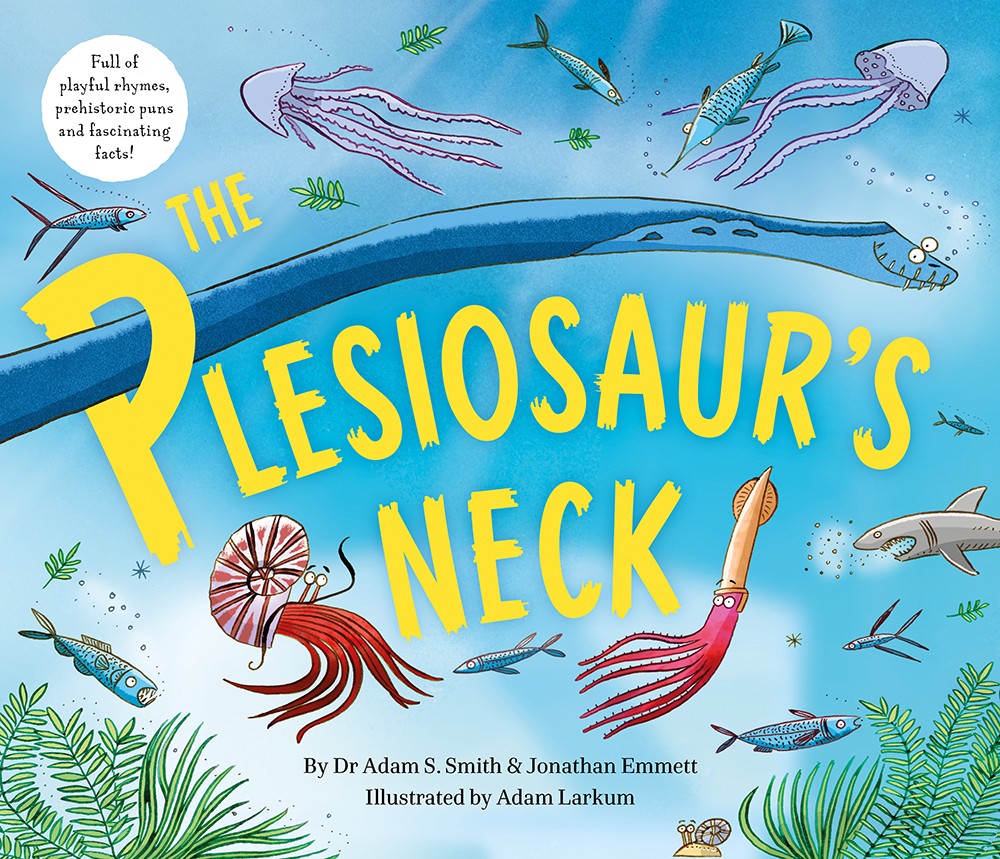 Currently shortlisted for the
Ages 6-11 category of the
SPARK! SCHOOL BOOK AWARDS

“There’s one thing about her that’s hard to ignore,
THAT RIDICULOUS NECK! What on Earth was it for?”

Poppy the plesiosaur had a preposterously long neck – but what was it for? Did she use it to pluck off pesky parasites, to zap predators with electricity or to ambush unlucky fish?

“The many possibilities are entertainingly presented and vividly illustrated, marrying the key facts with rhyming asides to keep children fully engaged.”
CHILDREN’S BOOK OF THE WEEK
James Cann, THE INDEPENDENT

“The book will entertain and inform children from 5 years and upwards in equal measure.  … ‘The Plesiosaur’s Neck’ combines colourful characters with a cornucopia of fun facts.”
EVERYTHING DINOSAUR

Currently shortlisted for the
Ages 6-11 category of the
SPARK! SCHOOL BOOK AWARDS

The Plesiosaur’s Neck is my 39th picture book, but the first I’ve written with a co-author. It is also the most complex picture book I’ve worked on, chiefly because co-author Dr Adam S. Smith and I were so keen to get the science right.

I first met Adam in his role as the Curator of Natural Sciences at the Nottingham Natural History Museum at Wollaton Hall. I approached Adam to ask if the museum would be willing to host a book launch for How the Borks Became: An Adventure in Evolution. The museum agreed and as I got to know Adam over the following months I discovered that he was also a palaeontologist specialising in the anatomy and evolution of Mesozoic marine reptiles, particularly plesiosaurs.

The Plesiosaur’s Neck was inspired by a 2014 blog post Adam had written for his website plesiosauria.com which outlined some of the hypotheses palaeontologists have suggested to explain why elasmosaurid plesiosaurs had evolved such remarkably long necks. These long-necked plesiosaurs are inherently comical in appearance and many of the hypotheses suggested to explain their proportions are very amusing and entertaining. So when Adam asked me if I thought the blog post could be turned into a children’s book, I said yes, and outlined how it might work as a rhyming picture book, supplemented with more detailed information. Adam invited me to collaborate with him on the project (which I had been secretly hoping he would!) and we set to work writing it. 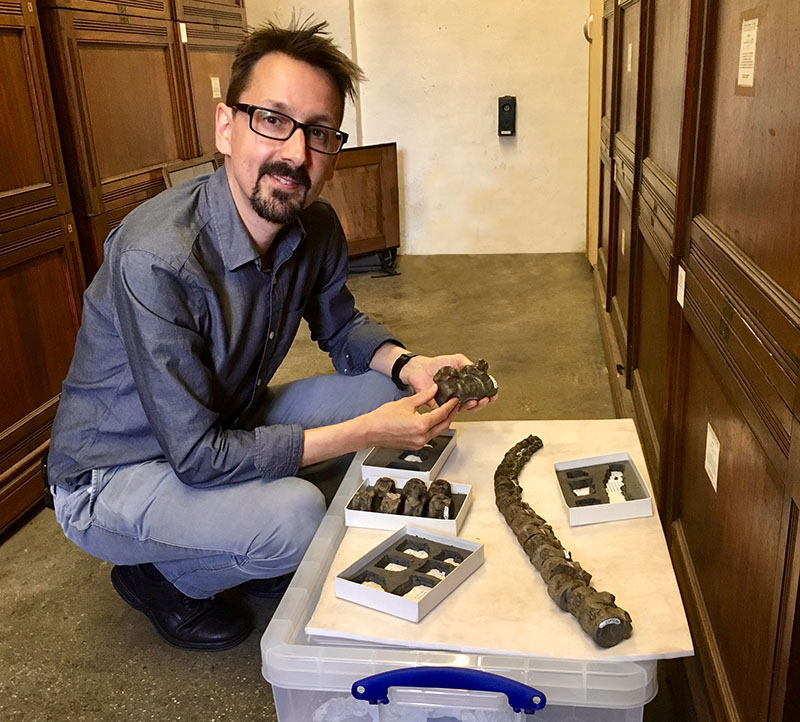 Adam assembling the fossilised vertebrae (backbones) of a plesiosaur in one of Nottingham Natural History Museum’s store rooms.

Adam chose to use an Albertonectes plesiosaur in the book as this type has the longest neck – almost two-thirds of its body length! Only one fossilised Albertonectes specimen has been found – in Alberta, Canada (from where it takes its name) – but it is a complete skeleton except for the head.

I wanted the Albertonectes in the book to have a character of its own and thought “Poppy” would be a good alliterative name. However, since our Albertonectes was based on the one found in Canada, I thought it made sense to check if that individual already had a nickname and if there was any evidence to suggest if it was male or female. So Adam contacted Don Henderson, the palaeontologist who had discovered the Canadian fossil, who was able to confirm that the specimen did not have a nickname and its sex was unknown. I’ve previously written a few very simple non-fiction books and a great deal of time is usually spent researching and fact-checking information. One of the pleasures of working on this book with an expert like Adam is that, when I had a question like this, he already knew the answer or – in the few instances like this one when he didn’t – he knew another expert who did and was able to get the answer very quickly.

To our delight, the book was accepted by Hazel Holmes at UCLan Publishing and illustrator Adam Larkum was given the formidable challenge of illustrating Poppy’s prehistoric undersea world in a way that would appeal to very young readers while maintaining a high degree of scientific accuracy. Working with two people called “Adam” was potentially confusing, so I quickly learnt to refer to them as “Adam S” and “Adam L”.

To ensure that Poppy had the right proportions in the illustrations, Adam S reconstructed drawings of the Albertonectes skeleton to produce an anatomically accurate guide silhouette of Poppy’s body. The ammonite and belemnite silhouettes were also included on this drawing to give Adam L an idea of Poppy’s size in relation to Alfie and Bella, the joke-cracking cephalopods who accompany her on every spread. 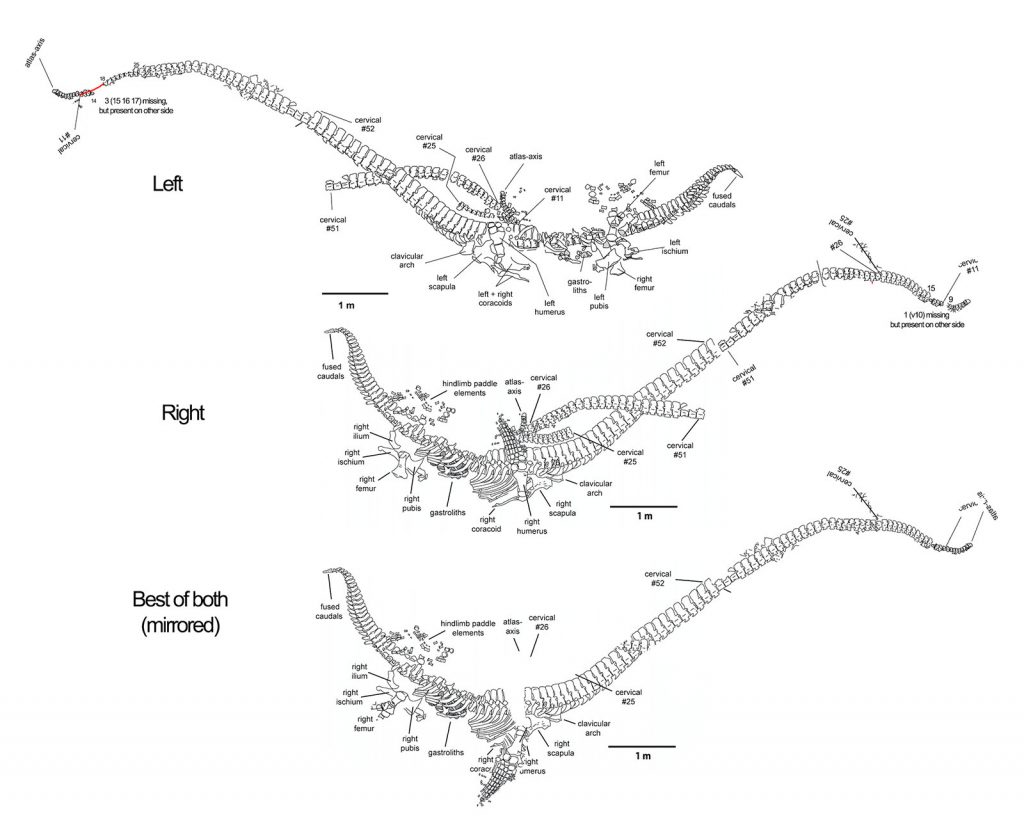 Diagrams of the original Albertonectes fossil and Adam S’s reconstruction and outline drawings.

The Albertonectes fossil is missing a skull, so Adam S provided Adam L with images of another elasmosaurid plesiosaur from the same family as a reference for Poppy’s head. The one big anatomically incorrect detail we allowed was Poppy’s ping-pong ball eyes, which give Adam L’s illustrations of her a lot more character and charm.

We wanted the ocean Poppy inhabited to be reasonably scientifically accurate as well, so Adam S provided Adam L with over 40 reference images of plants and animals from the late Cretaceous period to populate his illustrations with, some of which – including the fabulously named “sabre -toothed herring” – are identified in a “Spotter’s Guide” at the back of the book.

A Spotter’s Guide at the back of the book highlights some of the other creatures that feature in Adam Larkum’s illustrations.

The main rhyming text of the book is accompanied by information boxes giving more detailed information and this rich mix of appealing illustration, playful rhymes, scientific detail and prehistoric puns was skilfully marshalled into a set of smashing layouts by designer Becky Chilcott.

Adam S and I sometimes describe the book as “a prehistoric puzzle”, so some readers may be surprised to discover that no answer is provided at the end. Instead we ask a question, “What do you think that immense neck was for?”. We hope that this book will help young readers to understand the scientific method – proposing and evaluating alternative hypotheses – and encourage them to think critically for themselves.

“Why did plesiosaurs – kings of the ocean when dinosaurs ruled the Jurassic world – have such long necks? That remains a major mystery of science, with researchers unable to pin down one satisfactory answer: was it to scoop up schools of fish, to empty crevices of crabs, or even to electrocute would-be predators? Nottingham Natural History Museum palaeontologist Dr Adam S Smith is one such expert, and in The Plesiosaur’s Neck he and co-author Jonathan Emmett attempt to solve the seven-metre puzzle. The many possibilities are entertainingly presented and vividly illustrated, marrying the key facts with rhyming asides to keep children fully engaged.”
CHILDREN’S BOOK OF THE WEEK
James Cann, THE INDEPENDENT

“A mixture of playful, rhyming text and prehistoric puns guides the reader through the story. … The book will entertain and inform children from 5 years and upwards in equal measure. … “The Plesiosaur’s Neck” combines colourful characters with a cornucopia of fun facts. It is an entertaining exploration of a genuine palaeontological puzzle focused on a plesiosaur with an astonishing seventy-six bones in its neck.”
EVERYTHING DINOSAUR

“You can now add The Plesiosaur’s Neck to the list of books that will fascinate young palaeontologists and congratulate its creators too for finding a fresh approach. …It works really well and will catch youngsters’ imaginations while giving them a really good idea of how plesiosaurs lived, and insight into how scientists form their theories. A really lively and effective book”
BOOK OF THE WEEK
Lucy Staines, BOOKS FOR KEEPS

“Children can explore entertaining hypotheses scientists have suggested to explain this prehistoric puzzle … Playful rhyming text outlines each hypothesis and is supplemented by fact-filled information boxes exploring some of the science behind each suggestion.”
One of Teach Primary’s 50 MODERN READS EVERY SCHOOL LIBARY NEEDS
TEACH PRIMARY

“World-renowned plesiosaur expert Dr Adam S. Smith, award-winning author Jonathan Emmett and illustrator Adam Larkum work their prehistoric magic on this fun and fact-filled rhyming picture book which blends laughter with fascinating science. … With its mixture of a playful, rhyming text explaining each hypothesis, plenty of prehistoric puns, fact-filled information boxes exploring the science behind the suggestions, and a wry, running commentary from two chirpy, cheeky cephalopods – Alfie Ammonite and Bella Belemnite – this is the perfect way to make learning fun. Add on Larkum’s lively, beautiful and scientifically accurate illustrations and you have a dream read for fact-guzzling young dinosaur fans. The winner by a neck!”
Pam Norfolk, LANCASTER GUARDIAN

“I certainly wasn’t expecting a rhyming text when I received this book but wow! It really works and is a terrific read aloud. … Along with the playful, punning rhyming narrative is a series of fact boxes containing a wealth of additional information and in a rather wacky role are a pair of molluscs, Alfie Ammonite and Bella Belemnite, that chip in with jokes, and cheeky comments and puns … Adam Larkum’s illustrations are full of fun, adding to the entertainment of what is a smashing exploration.”
Jill Bennett, RED READING HUB

“In the book we learn to think like a palaeontologist and try to guess the evolutionary reasons for the Plesiosaur’s long neck. … The Plesiosaur’s Neck is an amazing book full of puns and dino jokes, inquisitive thinking, and detective-like clue searching!”
Tita Berredo, MY BOOK CORNER