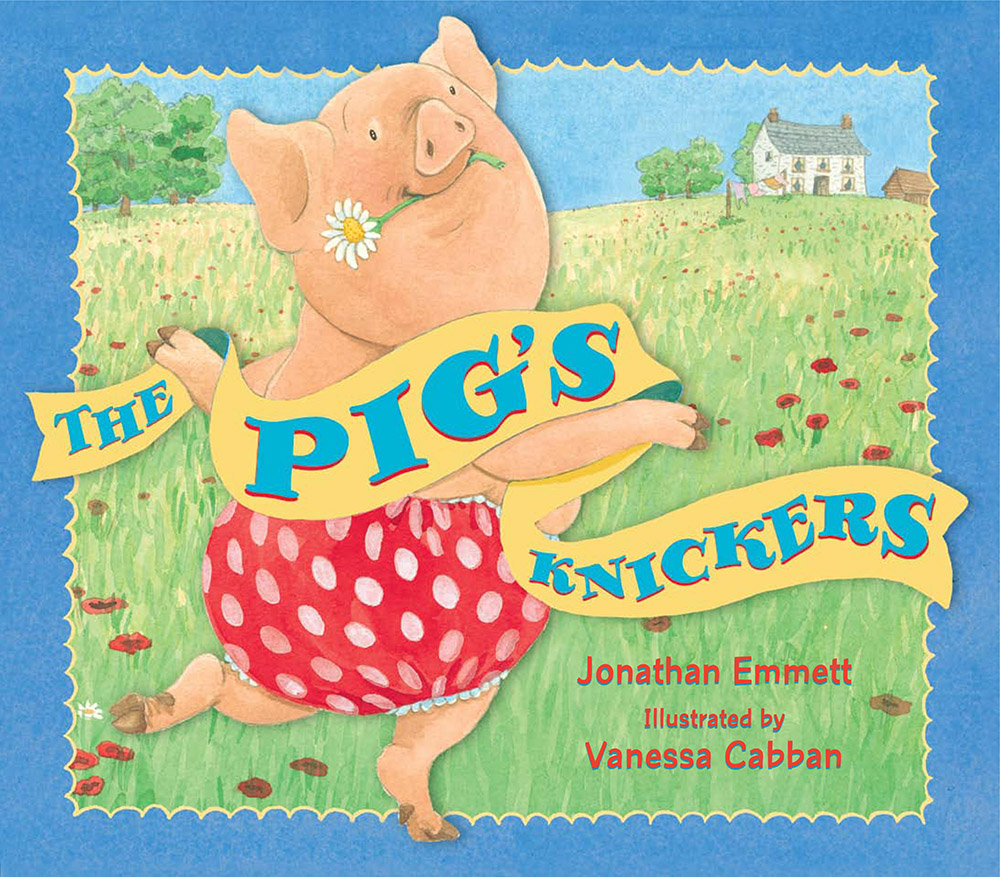 Pig’s new polka-dot knickers make him feel so special that he can’t stop showing off in them. “What do you think of me in my new knickers?” he asks, as he parades proudly past his friends. But is it really Pig’s knickers that are so extraordinary – or is it something else?

“An entertaining and funny story
with a joyous message”
Lindsey Stainer, THE BOOKSELLER

The Mole and Friends series, that began with Bringing Down the Moon, has been very popular, so after the fourth Mole book was finished the series’ UK publisher, Walker Books, asked me if I could come up with a story featuring a new set of characters that might be the start of another series for Vanessa Cabban (Mole’s illustrator) to illustrate.

Having used woodland creatures for the Mole and Friends books, I wanted a contrasting set of creatures for this book, so I chose farmyard animals. I had an idea for a story about an items of clothing that had a transformative effect on the character wearing it. So I experimented with pairing different farmyard animals with different items of clothing. As soon as the pairing of “pig” and “knickers” occurred to me, I knew I was on to something. The word “knickers” is inherently funny and the phrase “The Pig’s Knickers” has a similar ring to established phrases such as “The Cat’s Pyjamas”.

The first version of the story I wrote was quite different from the one in the book; the knickers made Pig big-headed and there was no dancing or acrobatics, Pig just paraded around telling the other animals how fashionable he now looked in comparison to them. His boasts took the form of a song, the first three verses of which are shown below.

Sheep looks so chic in her woolly one-piece,
There’s nothing that suits her so much as a fleece,
But she’s nowhere as stylish, nowhere as slick as
Magnificent ME in my polka-dot knickers!

Cow’s slinky suede suits her down to the ground,
And that black and white pattern’s the coolest around,
But she’ll never turn anyone’s head quite as quick as
Miraculous ME in my polka-dot knickers!

If you’re searching for style, then you might go for Goat,
Who is classily clothed in a cool cashmere coat,
But he’s not as well-dressed, not such a good pick as
Marvellous ME in my polka-dot knickers!

I could tell that the story wasn’t quite working, but couldn’t figure out how to fix it. Fortunately Denise Johnstone-Burt, one of the book’s editors, was able to point me in the right direction by suggesting I should cut the songs to make room for a little interaction between Pig and the other animals, and try to make Pig less arrogant and more likeable. I also reworked the story’s ending, making it more upbeat by having Pig recognise that he was capable of being extraordinary with or without his knickers, and came up with a funnier way for the knickers to disappear (they were simply carried away by the wind in the original version).

The second version worked much better and Walker accepted it, so Vanessa was able to start work on the illustrations.

Apart from Goat, the other characters don’t have a lot to do in this story, but if the book proves popular, I hope there will be further books centred on each of them. I already had ideas for the plots of these books which I  passed on to Vanessa when she was doing the character sketches.

The Pig’s Knickers is quite different in both writing and illustration style from the Mole and Friends books Vanessa and I have done together previously. Pig is a great deal more extrovert than Mole and his antics are far more broadly comical, but both Vanessa and I are both very pleased with him!

Pig is feeling a bit humdrum until a pair of bright red spotty knickers happen to fly from a washing line and land on his head. He dons the bloomers and has a jolly time, parading around with confidence. The Pig’s Knickers is an entertaining and funny story with a joyous message about sharing your feelings with friends and learning that it is what is on the inside that counts.
Lindsey Stainer, THE BOOKSELLER

This is a fantastic, cheeky, witty children’s book … The protagonist, pig, is possibly my favourite preschool book character of all time; theatrical, flamboyant, camp, outlandish.
WHAT FRED READ

This is such a happy picture book! Young kids will giggle over the title, and continue giggling over Pig’s antics … while parents will appreciate the subtle humour of the story … exuberant, dramatic and laugh-out-loud funny.
Susan Stephenson, THE BOOK CHOOK

A delightfully silly, ridiculous story that will keep you giggling incredulously for a few hours.
Lucy Rose Thompson, 5MINUTESPEACE