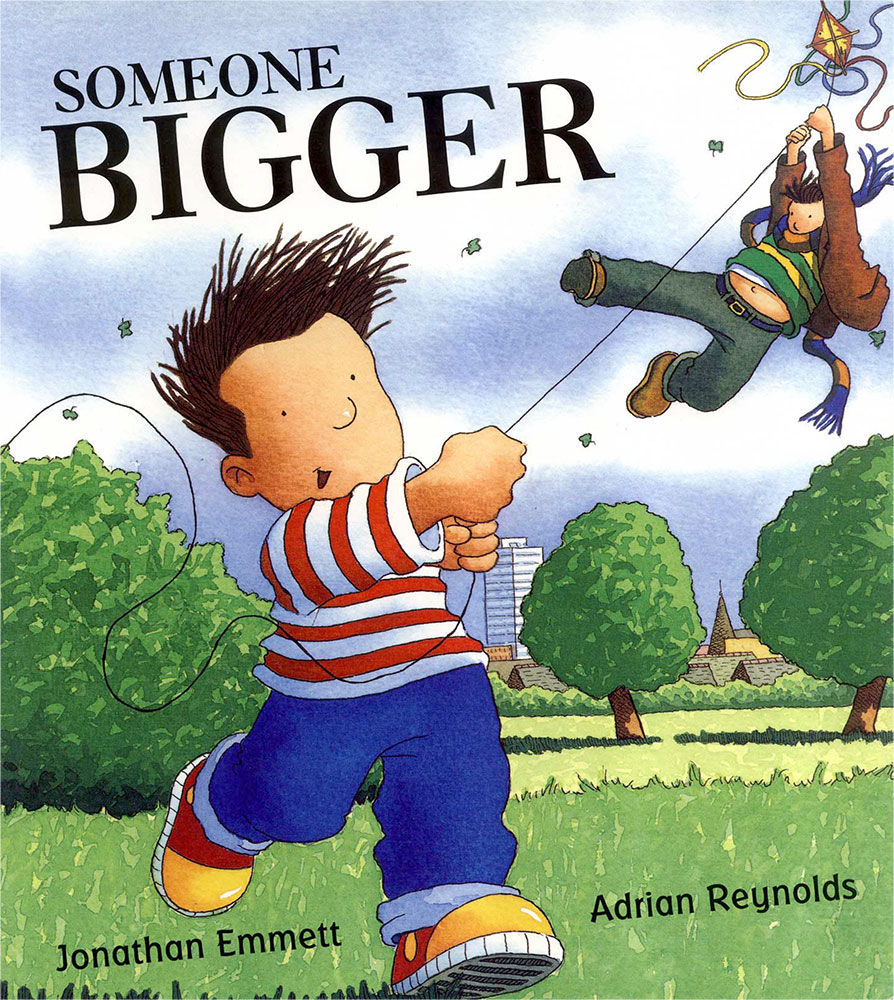 Sam and Dad have made a kite.
They’ve made it large; they’ve made it light.
Sam can’t wait to try it, but Sam’s Dad says Sam’s too small to fly it – this kite needs SOMEONE BIGGER!

“This fun outing has three things going for it: the story, the writing, and the art – a triple threat in the picture-book department.”
KIRKUS REVIEWS

“Colourfully accomplished, energetic illustrations … Brisk, tidily rhythmic and neatly rhymed verse … Early years classrooms would be all the brighter for the presence of this book.”
Trevor Dickinson, THE SCHOOL LIBRARIAN

Download the
Someone Bigger
SPOT THE DIFFERENCE
activity sheet 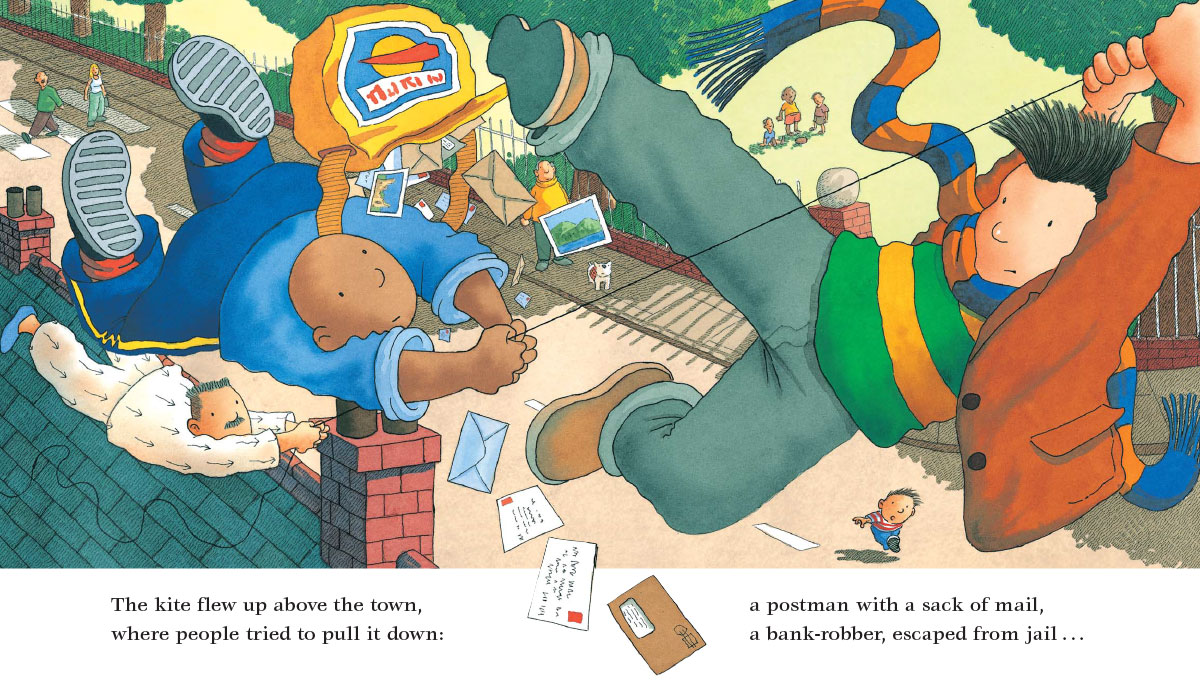 My son, Max, was two years old when I started working on this story and the proud owner of a Thomas the Tank Engine kite. Whenever we took the kite out, Max was always keen to hold the string and fly it himself. However this wasn’t always practical – in a light wind he had difficulty getting it off the ground and in stronger winds I was worried that he would let go of it. It was his understandable frustration at having to stand by and watch a grown-up flying HIS kite that inspired this story.

The story went through several drafts, over several years, before I arrived at the published version. The first draft was called Katie’s Kite. It was very similar to the final version, except that the story was centred around a small girl rather than a small boy and it was not told in rhyme.

Two years later I did another draft called The Runaway Kite. This version featured animal characters, with Katie and her father replaced by a shrew and a mouse. A succession of progressively larger animals, ranging from a squirrel to a bear, attempt to secure the runaway kite – only to be pulled up into the sky after it. This animal version, which was still not in rhyme, included one of the airborne characters shouting the line “Find someone bigger to grab hold of it.”

When I went back to the story for a third time, I fastened onto the phrase “someone bigger”, reverted back to human characters and decided to try setting the story in rhyme – and this time I came up with something that I was happy with. I think that the finished version has a traditional nursery tale feel to it and I described it to prospective publishers as the The Enormous Turnip turned upside down, with a pinch of The Golden Goose.

Oxford University Press took the story and asked Adrian Reynolds to illustrate it. I had strong preconceptions about how the illustrations might look – I had expected to see lots of long shots with the little boy, Sam, and the kite at opposite corners of the spread. However Adrian’s drawings turned out to be very different, consisting chiefly of close ups and striking aerial perspectives. The resulting illustrations have exceeded my expectations and I think that they have made the story far more dramatic and appealing. My favourite spread is the one shown above with the postman being pulled up into the sky with all his letters tumbling out of his bag.

In Emmett’s winning fable about competence and confidence, young Sam believes he’s old enough to take the reins of his new kite, which Reynolds depicts as larger, than the young hero (and nearly as large as Dad). “No, you’re too small!” says Dad. “This kite needs someone bigger.” Then the wind kicks up and the father finds himself flying. Several other adults (“a postman with a sack of mail, / a bank robber, escaped from jail… ” a bride, her groom, etc.) plus some hefty critters try to pull the kite down only to be taken aloft. “Can I hold it now? / … / I’m old enough – / I know I am!” Sam asks each time another victim ascends. “No you’re too small!” comes the refrain. “This kite needs someone bigger!”
Reynolds’s fine black line limns strong, crisp shapes and his saturated watercolors make a wonderful foil for the improbable aerodynamics. Because the pictures never cross over into cartoonishness, the focus remains on the earthbound Sam and his determination to prove his mastery. Finally, when Sam is the only one not airborne, he grabs the string “and even though he wound and wound, / his feet stayed firmly on the ground.” With everyone returned to terra firma, Emmett and Reynolds offer satisfaction to young readers on two counts – Sam not only gets his moment of triumph, he also gets to say, “told you so.” Age 4-7.
PUBLISHER’S WEEKLY

This fun outing has three things going for it: the story, the writing, and the art – a triple threat in the picture-book department. The rhymed narrative is cheerful, telling the cumulative tale of a kite that keeps going skyward … Bravo, Sam, and a decided nod to Reynolds’s art, too, with its buoyant, serene tomfoolery full of round-mouthed, dot-eyed whimsy.
KIRKUS REVIEWS

Colourfully accomplished, energetic full- and double-page illustrations … The entire narrative canters along in brisk, tidily rhythmic and neatly rhymed verse. Early years classrooms would be all the brighter for the presence of this book, not least because of the subtle way in which it encourages children to join in.
Trevor Dickinson, SCHOOL LIBRARIAN

Reynolds’s colorful watercolor cartoons depict the bouncy adventure, which is told in singsong verses … Young readers will appreciate the boy’s predicament and love the fact that, despite his small stature, he saves the day. A great choice for storytime and one-on-one sharing.
G. Alyssa Parkinson, SCHOOL LIBRARY JOURNAL

With its rhyming text and repetition, this is a delightful story about the frustrations of being a small child.
BOOKTRUST