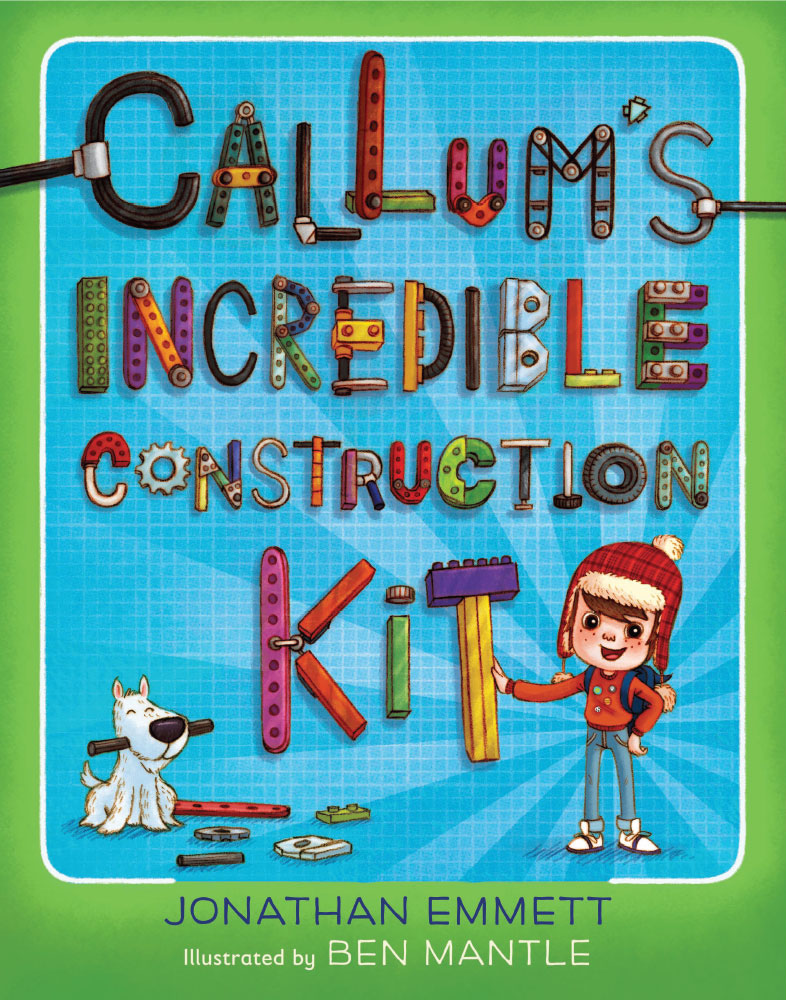 Meet Callum, a small boy with BIG IDEAS and an INCREDIBLE CONSTRUCTION KIT with which to build them. When Callum collects more kit than his house can hold, it looks like he might have to stop …  until he comes up with a REALLY BIG IDEA to solve the problem.

“With quirky, vibrant illustrations, this imaginative story is full of humour and will have you smiling from start to finish.”
CHILDREN’S BOOKS IRELAND RECOMMENDED READS 2012

“Any child would love to play with Callum’s
ingenious creations … With delightful, quirky touches …
readers will love exploring this book.”
WE LOVE THIS BOOK 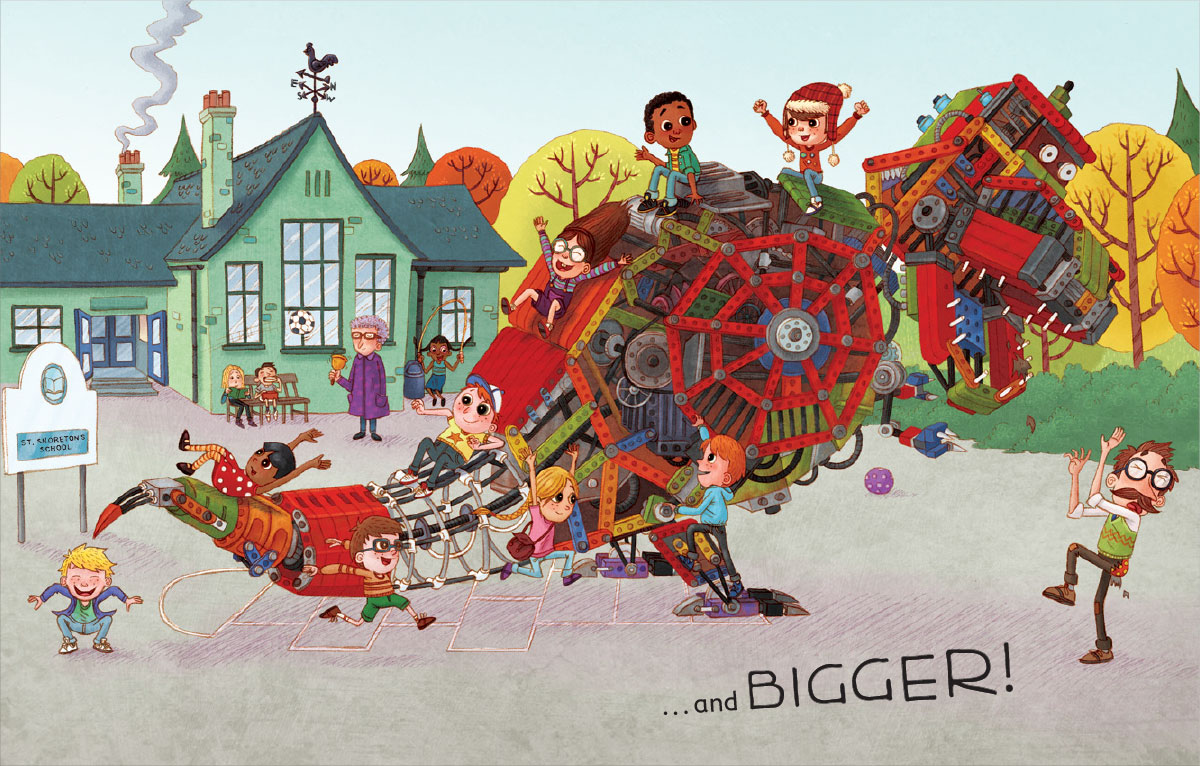 I’ve always loved designing and constructing things. As a boy, I spent days making things out of Lego. Inspired by the aircraft Thunderbird 2 from the TV series Thunderbirds, I was particularly obsessed with making sets of Russian-doll-like vehicles that fitted inside each other and constructed endless variations on this theme.

As I got older I tried, mostly unsuccessfully, to use Lego to make things that I could actually use: a motorised card-dealing machine that shot cards out in a continuous stream, instead of one at a time, and a series of crossbows, strung with elastic, which had a tendency to explode when I pulled the trigger.

One Lego invention I made that did work, probably because it was relatively simple, was the alarm system I built for my Santa trap (which you can see a recreation of in the  author’s note for The Santa Trap.

This fascination with design and construction extended into my adult life when I became an architect. One of the shortcomings of this job, as far as I was concerned, was that while I got to design buildings, I had to stand aside while someone else built them.

I stopped being an architect to become a children’s author, but I kept on designing and constructing things like the pop-ups for my pop-up books or the furniture I make as a hobby. And when my young son started playing with Lego, it gave me an excellent excuse to start building things with Lego again.

Not surprisingly, this enthusiasm has fed into the stories that I write, many of which feature things being built. The characters in What Friends Do Best, Dig It Build it!, Pigs Might Fly, The Santa Trap, Tom’s Clockwork Dragon , MONSTERS: An Owners Guide and ALIENS: An Owner’s Guide all have to build something, usually to solve a problem or overcome a challenge.

Callum’s Incredible Construction Kit is all about building things. It was partly inspired by one a favourite children’s book series from my childhood, Harold and the Purple Crayon by Crockett Johnson. In those books, Harold doesn’t build things, he draws them with a magical crayon and his drawings come to life. Having the ability to make whatever you imagine become real is a hugely appealing idea, but Harold’s world is two-dimensional, it’s confined to the flat surface on which he crayons. I wanted to write a story in which a child – Callum – could do something similar but in the real world. Obviously with an unlimited supply of the materials, Callum could build anything he wanted, but that would be too straightforward. I needed an object like Harold’s magical crayon, that with imagination and resourcefulness could be used again and again to create whatever was needed.

A giant construction kit seemed to be the answer, but there was one problem — Callum would need an awful lot of kit to construct some of the things I imagined him building, where would he keep it all? Instead of treating this problem as an obstacle that had to be avoided, I used it as part of the story. Callum crams so much kit into his house that something terrible happens. But the resulting disaster presents him with the opportunity to build the incredible construction that is the climax to the story.

I wrote the story in 2006, but it took over a year to find a publisher that was interested in taking it, another two and a half years before it was accepted for publication and another three years before it was finally published in 2012. The story was picked up by Lara Hancock at Egmont and one of the reasons for the relatively long delay was that, although Lara recognised the story’s appeal, she also recognised that it would not work as a picture book without the right illustrator. One of the pitfalls of writing picture book stories about machines is that there are relatively few picture book illustrators who have a good feel for technology and are able to illustrate it in an appealing way. Lara did not want to accept the story until we’d found a suitable illustrator and since I knew this was vital to the appeal of the book, I agreed to wait.

After a couple of false starts, we eventually found Ben Mantle who has done an excellent job of illustrating the book. Ben did some early samples that demonstrated that he could handle the technology, but he was asked to fine tune his approach, revising the characters and artwork style. The early samples showed the construction kit dinosaur and the one change I requested was that the kit be made from smaller pieces, rather than large pieces that are less adaptable to other uses and would be too bulky for Callum to handle on his own.

I’d given quite a bit of thought as to what form Callum’s kit should take and suggested something along the lines of Lego Technic, which is halfway between conventional Lego and Mechano or K-nex. I also suggested that the pieces should be a varied mix of colours, reflecting that it had been scraped together from several second-hand kits.

Ben wasn’t aware of the likeness, but one of the things that myself and my family find amusing about his final illustrations is that as well as sharing Callum’s enthusiasm for the kit, Callum’s father bears a striking resemblance to me when my son max was Callum’s age. 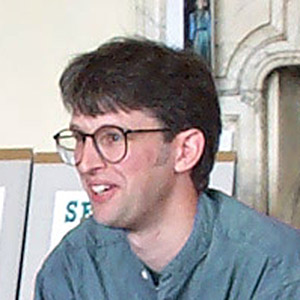 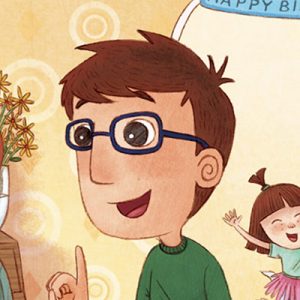 Callum’s dad bears striking resemblance to me, when my own son was Callum’s age.

With quirky, vibrant illustrations, this imaginative story is full of humour and will have you smiling from start to finish.
Ruth Donnelly, CHILDREN’S BOOKS IRELAND RECOMMENDED READS 2012

A captivating story with bright intricate illustrations. Fantastically creative, Callum’s incredible construction kit is used to build a wonderful array of wacky problem solving inventions that range from the almost plausable to the whimsical. The last pages fold out to reveal Callum’s most ambitious creation yet! A wonderful book that will inspire young creators and fascinate kids with its cleverly detailed illustrations.
BRIGHTSTAR BEDTIME STORIES

The illustrations by Ben Mantle are great and the final story conclusion is brought to life by the addition of a great big fold out picture.
BABY LONDON

A funny picture book with hugely detailed illustrations, children with a love of adventure and creativity will enjoy poring over it.
SURREY ADVERTISER

This amusing new book by award-winning author and former architect Jonathan Emmett is enhanced by Ben Mantle’s colourful illustrations. Callum receives a fantastic construction kit for his birthday and he lets his imagination run wild. Any child would love to play with Callum’s ingenious creations such as the sand-digger and the tractor. Children will identify with the environments and the packed pages will prompt lively family discussions. With delightful, quirky touches like the detail in the portraits, readers will love exploring this book, which doubles up as a wonderful full-page fold-out. A story with multiple storeys!
WE LOVE THIS BOOK