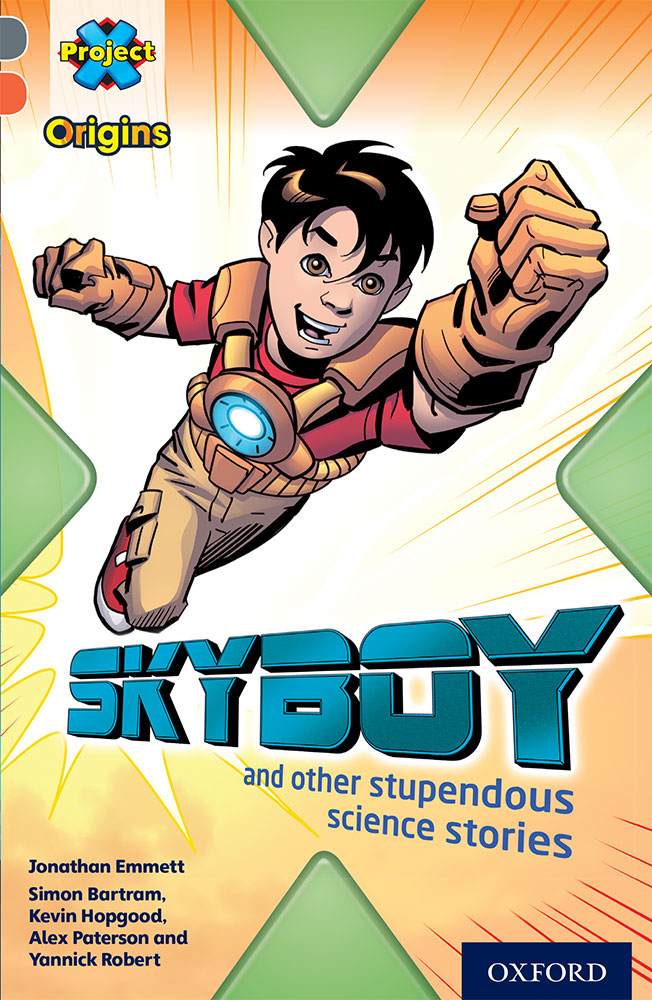 and other stupendous science stories

A mixed-format book comprising of:
a short story, a comic strip,
a play script and a poem

What are the mysterious ThinkRight up to?
How does Skyboy get his name?
Who is the greatest scientist in the world?
Are we really related to cucumbers?
Read on to find out more …

When Oxford University Press asked me if I’d like to write something for their Project X series, I had mixed feelings at first. They wanted me to write what they called a “Mash-Up”, comprising of three stories and a poem which seemed like a lot of work for one book.

However the theme of the stories was science, a topic that’s always appealed to me, and the three stories were all in different formats; a conventional short story, a comic strip and a play script. I’d never written a comic strip or a play script before, so I decided to give it a go. I’m glad I did, because I’m delighted with the way the book has turned out.

I wrote each of the stories about a different area of science:

The short story, Brought to You by ThinkRight, is about a sinister use of neuroscience (the study of how the brain works).

The comic strip, Skyboy Takes Off, is about the invention of an anti-gravity generator.

The play script, The Greatest Scientist of All Time, is about time travel.

And the poem, My Cousin is a Cucumber, is about evolution and the amazing fact that all life is thought to have descended from a single simple lifeform.

Although it’s the simplest story, the most challenging to write was the comic strip, Skyboy Takes Off. OUP’s brief required that the story be told in 10 pages (slightly smaller than A5) with no more than 3 panels on each page and a maximum word count of less than 150 words. There’s only so much plot you can cover in such a tight format, but I wanted a story that had some action and excitement, so I wrote an origins story for a young superhero that finishes the moment that Skyboy takes to the sky for the first time.

One reason I’m so pleased with the finished book is the illustrations. I can be quite picky about illustration style and with four different illustrators working on the book I thought it might take a while to agree on a suitable line-up. However the first four illustrators that designer Lily Trotter and editor Rachel Green suggested were all great matches for the stories they were illustrating. My short story, Brought to You by ThinkRight was influenced by the “Golden Age” science fiction short stories I’d read when I was growing up, so Simon Bartram’s slightly retro style is a great fit for that story. Skyboy Takes Off was very much in the tradition of Marvel comic superheroes, so I’m thrilled that Iron Man and 2000 AD illustrator Kevin Hopgood has illustrated it. I’d discovered Alex Patterson’s comical illustrations through Twitter and had recently suggested him for a book with another publisher, but it had ended up with another illustrator. So I was delighted that Alex was able to illustrate the play script of The Greatest Scientist of All Time instead. And Yannick Robert has done a terrific job of illustrating My Cousin is a Cucumber. I love Yannick’s little caricature of my science hero, Charles Darwin, sitting in a tree.