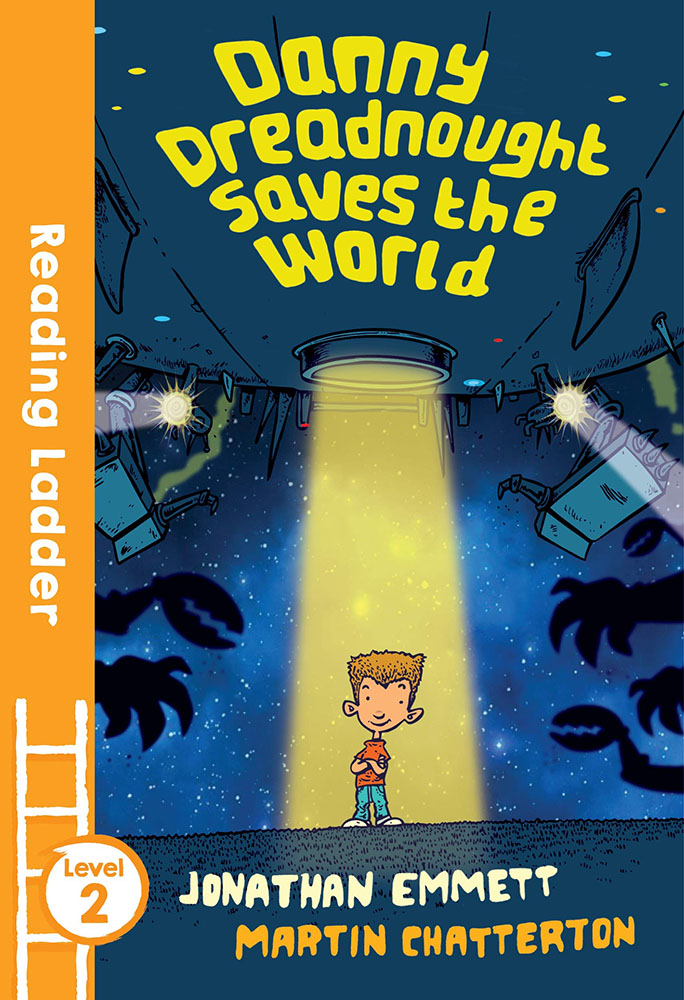 The fearsome Bugulons think invading earth will be easy.
But that’s before they meet Danny Dreadnought.
Danny isn’t afraid of anything!

“Frenetic and exciting action”
Phil May, READ IT DADDY!

Read more of these reviews 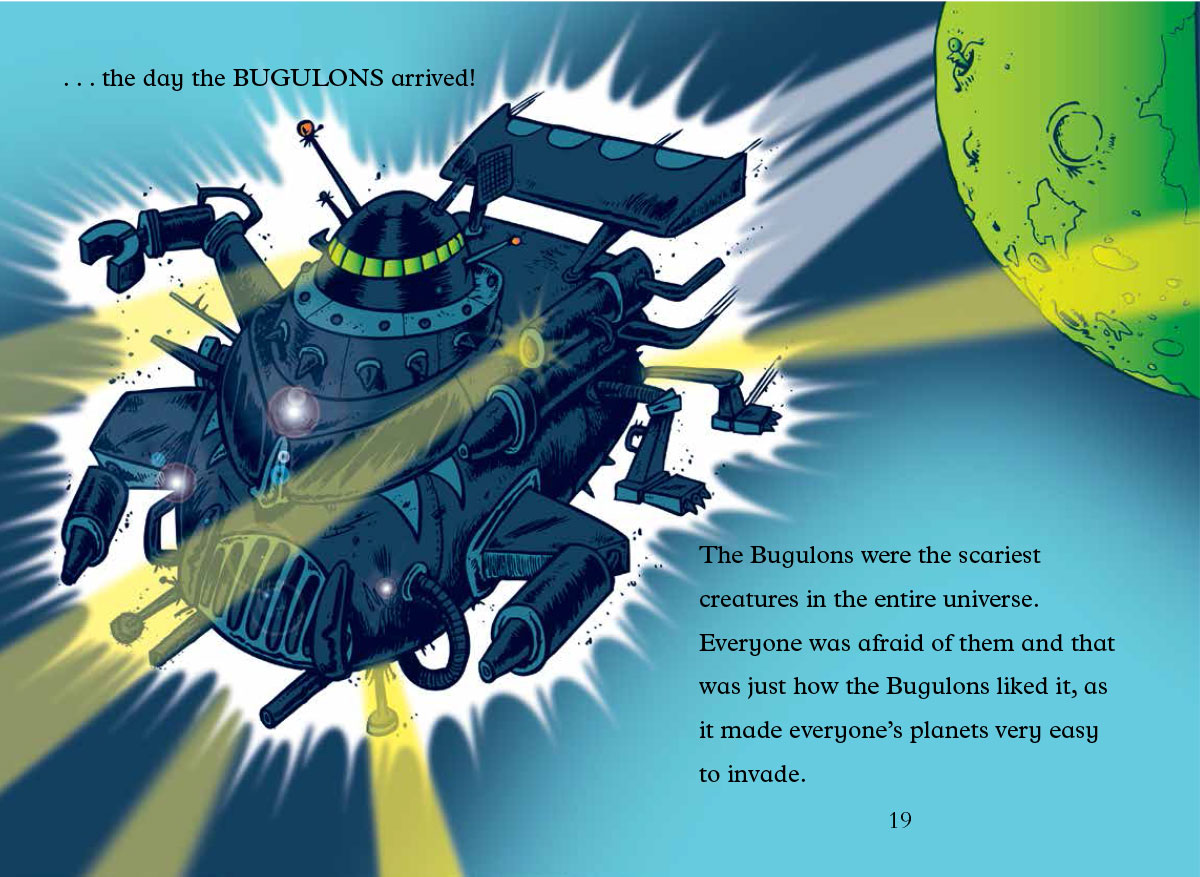 Danny Dreadnought was inspired by the German folktale The Story of the Youth Who Went Forth to Learn What Fear Was, which was included in the collections of the Brothers Grimm. In that story a fearless youth sets out to learn how to shudder. After various adventures the youth spends three nights in a haunted castle and drives out its evil occupants, earning himself great riches and a princess’s hand in marriage. At the end of the story the princess finally makes the youth shudder by pouring a bucket of cold water, filled with fishes, over him.

Richard Wagner reinterpreted the story in Siegfried, his operatic retelling of the Norse myth of Sygurd, but gave it a far more satisfying ending. In Wagner’s opera, Siegfried finally learns what fear is when he mistakenly thinks that his sweetheart Brünnhilde is dead. And a similar ending was used by writer Anthony Minghella for Fearnot a 1988 TV adaptation of the Grimm’s tale for Jim Henson’s excellent Storyteller series.

I thought this plot could make a great picture book and set about adapting it to into a contemporary setting with the youth’s role being taken by a little girl, Daisy Dreadnought. My early drafts of the story were quite close to the Grimm original, with Daisy spending the night in a creepy castle, haunted by a trio of spiteful aristocratic spooks. The romantic Wagnerian ending wasn’t appropriate for such a young heroine, but I wanted an ending that felt similarly satisfying so, after banishing the ghosts from the castle, Daisy returns home to find her parents aren’t there. Thinking they’ve abandoned her, Daisy finally feels afraid, before her parents return home and allay her fears.

I sent this draft to several picture book publishers, but none were interested. One editor commented that the haunted house setting made it seem like a Halloween story, which would limit its appeal for the rest of the year. I still felt the story had potential so I did another draft. Bearing in mind the Halloween comment, I replaced the family of ghosts with an army of alien invaders – the fearsome Bugulons. I showed this revised version to publishers and, while none wanted it as a picture book, Egmont took it as a first reader for their Bananas series.

Adapting the story into a first reader was relatively easy. One of the nice things about the Bananas series is that, like picture books, they have full colour illustrations on every page. And, while the pages are smaller than those of a picture book, there are twice as many to tell the story in. One thing I had to change was Daisy’s gender. Editor Hannah Sandford explained to me that there were already lots of Bananas books featuring plucky heroines, so it would be nice to have a story with a plucky hero for a change – so Daisy became Danny.

Although the story features many scary situations, it’s meant to be funny, so I was keen that it should be illustrated by someone with a comical flair. I often suggest possible illustrators for my books and Martin Chatterton was one of the illustrators I suggested for Danny Dreadnought; I’ve always liked Martin’s style and knew that he’d already illustrated some Bananas books. So I was pleased that Egmont agreed that he’d be a good choice and delighted when Martin agreed to illustrate the book. Martin’s illustrations have exactly the whacky comic book feel that I was hoping for and I’m particularly pleased with the way he’s drawn the Bugulons, the intergalactic bullies who try to take over the Earth. His illustration of the Huge Scary Spaceship (shown above) is magnificently menacing.

Danny Dreadnought is bold. He is brave. He is not afraid of anything, despite his parents’ best efforts to take him to all the scariest places they can think of. So it’s very lucky indeed that when the terrifying alien Bugulons invade earth it is Danny whom they first encounter. Neatly conveyed using only two or three sentences for each double-page spread, this is a lively story rich in adventure — and with a nicely understated message.
Kate Agnew, BEST NEW CHILDREN’S BOOKS 2015

“Frenetic and exciting action … A great book for reeling out a whole plethora of gurgling slimy Bugulon voices! Awesome!
Phil May, READ IT DADDY!